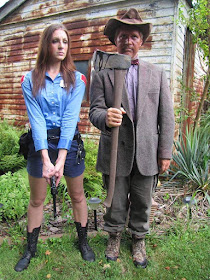 
The last film directed by David Silvio was a ditty called Fetish Dolls Die Laughing, from 2012 (reviewed HERE). So you can see, he has a way with titles; before calling out the Sexist Squad or PC Wagon, perhaps it should be noted that the film was written by David's spouse, Diana Silvio.


One thing is clear, and that is while fetishism is not the focus of this release, it is certainly present in many forms, including S&M, bondage, lesbianism, chloroform (yes, that’s a real thing), and sexual asphyxiation. It’s almost like it’s one of the characters, rather than the plot itself.

Also living on the property is PTSD-laden Andy, his insane killer twin (or is he?) Alex (both played by Ryan Bergman, the centerpiece for this release), and Sam (David Dietz), a perverted growling grounds keeper who reminds me of Arte Johnson's Tyrone Horneigh character from "Laugh In." See, the problem is that Alex is fixated on his childhood friend, Jenny (Mary Houle), who… well, I’m not going to give it away, but it’s not good and it traumatized him.


Into this mix comes our short-shorts officer who is looking for Cheryl, and has a few sexual leanings of her own, as we come to find out. She sneaks around the house trying to get some information on Cheryl and learns a bit more than she’s bargained for, but is she equipped to handle it? 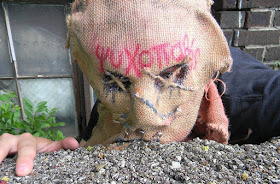 Well, that’s as far as I’m willing to say about the story proper, so no spoiler alerts. I should also confess that I am a happy wuss who has none of the fetishes presented here (mine is punk rock and horror films… duh), so some of the attraction goes over my head, but I can sympathize if not empathize. Desire is desire, and one can look at it that way; or, do what I did, which is see it as a slasher film with lots of (often weird, pinkish colored) blood. Most of the violence, and there is plenty, happens just beyond the frame of the camera, much like Hitchcock did with Psycho (1960), but the splatter is everywhere – and as far as I can tell, it’s all practical SFX; I didn’t really see any digital enhancements, which is cool.

﻿
This is the kind of film that you just need to turn your brain off, and enjoy the ride. There are plot holes, the occasional over- or under-acting, and behaviors of characters that would make no sense in the real world. But this is not the real world, this is micro-budget indie filmmaking, and in that context, it is successful. The characters are interesting, especially the question of who is real and who isn’t, and there is also a very subtle dark-dark-dark humor that runs throughout.

Because of the need for suspension of disbelief,
which can also be a really good thing, events happen that are unexpected. This is easier to do when the filmmaker is a bit lax on following the mainstream rules without the studio pressure for bottom line profit margin at any means necessary (e.g., the over-the-top-ness of Comic Book related mega-releases these days). That’s part of why I love indie films so much: the formula sometimes gets chucked out the door for Why Not?!


There are a few jump scares that aren’t that scary, but the thriller part of the story holds up decently, all things considered, as people are chased down, captured, escape, get captured, killed, etc. What’s also nice, in my opinion, is that despite the film’s title, it isn’t just women that fall victim to violence here and not just men that commit it, and it actually comes out quite equitable. Again, indie cinema = breaking rules.


Be sure to stay after the credits because there is a lead in to Silvio’s possible next film, Cannibal Sluts of Satan Place (oy, such a title…).