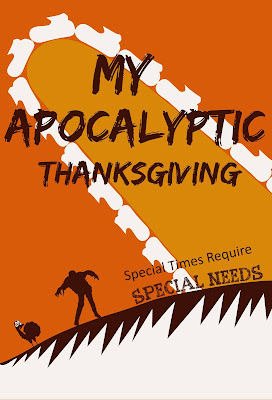 Sure, it is almost a brand-new year, but it must be Thanksgiving somewhere in the world, eh? Or is it that it must be 5:00 somewhere…whatever.

Wait, a feel-good movie involving zombies? Sure, it has been done before, such as the rom-com Warm Bodies (2013), but it is a bit rare as a zombie subgenre. Here, it is kind of indirect, in that we meet Marcus (Joshua Warren Bush), a 23-year-old special needs adult male with the mind of a child (he plays with zombie action figures, rather than just collecting them) who is obsessed with a television show, “Apocalyptic Zombies” (think a brain-dead – pun intended – impersonation of “The Walking Dead”).

Marcus lives in a group home with other special needs adults, and when his best friend Doris (Willow Hale), and older woman, passes on, Marcus is lost as she was like a mother to him. This leads him to search out for his long, lost mom (he does not even know her name, other than “Momma”), with whom he wants to share Thanksgiving and watch the last episode of his favorite program together.

Intermixed with all this, we get to see clips of the television show, also about a family of teenager, Andrea (Callie Gilbert) and her homemaker mom, who has the survival skills of Geena Davis’s character in The Long Kiss Goodnight (1996). We get to see Andrea do a lot of running in high heels and braless.

The real adventure for Marcus begins when he gets a job at a Korean-run laundry, thanks to Kim (Chris Wu), whose dysfunctional family – dad Jung (Ray Chang) and mom Me Young (Grace Shen) – eventually accepts Marcus as one of theirs.

In competition for Marcus to be family is a Latino drug gang, who use Marcus as an informer, an easier way for him to get money to visit his mom in another town. Their influence is not as positive, obviously being a bad influence. The rising question is who will win Marcus’s soul, eventually, as he views his experiences as if there were zombies. Kim’s family is essential the angel and the gang the devil on the shoulders, each whispering in his ears. Sadly, due to his condition, it is hard for him to see the negative influence of the gang and sees it equal to the positive one of the Korean family. While the man who runs the group home, Frank (Walker Haynes), who is also Doris’s son, mentions that Jesus was a zombie (reminds me of “Futurama”), there is a subtle hint here and there of religiosity throughout the film, such as Marcus and crew praying often, or Marcus’s case worker, Nicole (Clera Foster), leaving with “Have a blessed day.” It is not wielded as a sledgehammer or comes across as preachy, but my non-Christian chakras made me squirm a bit.

A bigger issue is as Marcus becomes more confident and belligerent thanks to the gang, he stops taking his anti-anxiety medications, and starts hallucinating zombies everywhere, becoming increasingly aggressive.

I occasionally found this a bit stressful to watch (but I did see the whole thing), because while watching a zombie film where someone gets a chunk bit out of them, or even their intestines ripped asunder, this is a “real” story about a sensitive man, even though it is fiction. It is why I was uncomfortable with Kramer vs Kramer (1979) while I laughed during Fulci’s The Beyond (1981).

There is some violence, but no nudity, but gang-girl Sophia (Carla Acosta) comes close in a floss bikini. However, here is a toothbrushing trigger warning (I can see a gory film, but watching toothbrushing disturbs me, for some reason). Gross.

The two central themes of the film are that special needs people deserve love, and what is the meaning of “family,” which makes for a perfect Thanksgiving-centered appreciation of those who care about us, and who we care about.