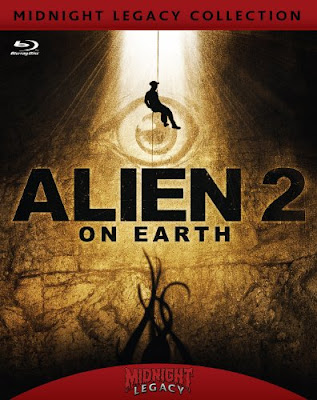 Fulci. Argento. Deodato. These are names that will sound familiar to those who find joy in the Italian horror sub-genre generally referred to as giallo. The more current ultra-horror films such as Hostel, Saw, and Wolf Creek, may not have existed without these extreme and surgically efficient foreign bloodfests (then again, would the giallo have seen any light without the likes of American pioneer Hershell Gordon Lewis? But I digress…).

One of the problems of seeing these films via video in those heady days of the ‘80 is that the ever-hungry market would release just about anything that might sell, even if it was an incomplete copy; sometimes the story made no sense at all due to sections being removed by a specific European country’s moral codes. This may vary from country to country, so there were many different versions of these releases floating around.

Alien 2: On Earth (originally Alien 2 Sulla Terra) is a supposed sequel to the original Alien, from 1980. While never having an official theater showing stateside, like many of these foreign films, it was released under various names, including Alien Terror and Strangers. Another quirk of the early VHS days was the tendency of the production companies to call just about any film a sequel to anything that did well at the box office. This is a bit of an exception though, because director Ciro Ippolito (who also went by the pseudonym Sam Cromwell for this, his first directorial effort) meant this as an “unofficial” sequel, even though the bonds to the original James Cameron opus are negligible, at best (i.e., human hosts and snake-like creatures eventually popping out). 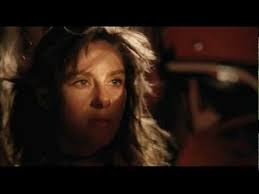 Alien 2 is, in hindsight, best described as having aspects of Alien, the underground spelunking death-trap of The Cave or The Depth, just a smidgen of The Night of the Living Dead, and the deserted streets scenarios of, well, so many others. The story is pretty simple: an American spacecraft returns to earth, and somehow, between starting its descent and the at-sea rescue (great Mercury-period stock footage is used during the opening shots), the astronauts have mysteriously disappeared. Around the same time, a strange sparkling rock is found by a group of friends (with big period hair, both female and male) in a small town near San Diego, before they head into a large cave system they plan to explore. For some reason, the main character, Thelma (Belinda Mayne), who is sometimes psychic and can tell that something is going to happen (unless it ruins a plot surprise moment, apparently), takes the football-sized rock, puts it in her backpack, and takes it with her from the surface into the cave (why not leave it in the car rather than schlepping it?). This shiny stone ends up actually being an egg for creatures brought back on the spaceship, and when it comes out of the rubbery-looking stone its destination is the host’s body.

From there, it’s a race to get to get out of the cave through alternative directions before becoming lunch. And once outside, will it be much better? Yes, there is gore, as a very puppet-looking creatures busts through a head with an eyeball hanging, or a head slides off a body (both seen in the trailer), for example. Despite the blood and guts, it is more really? than stomach-churning (unless you’re sensitive to these things). However, it is still a pleasure to see devices used rather than CGI.

Oh, and the inconsistent mistakes are wonderful. For example, while running through a supposedly empty city, as the camera follows the main character(s) while a street is crossed, the viewer can see a red light down the block and a car with its brake-light on. When the light turns green, the brake-light goes off and the car starts to move.

Just as with manga cinema, there are definite cues that this is giallo, almost like a checklist. There’s the close-up of the face with a light on it while a mysterious wind blows the flowing hair, the even closer shots of wide-eyes (though the “whites-only” eyes, usually a standard, is missing here), the shrill and two-tone electronic music (ooo-waaaa-oooo-waaaa), the shaky monster-cam view, and the very quick zoom in and out in Dr. Tongue’s House of Horror style. And like many Japanese films, the dubbed, over-enunciated voices are familiar to anyone who has watched a few of these films. In much of this release, while it is obvious that the actors are speaking English, the vocal track is recorded over back into English nevertheless.

Mayne’s character is the only one with any substance (relatively speaking), though there is no history given to her. Everyone else, including her (boyfriend?) (husband?), are inconsequential, or at least the equivalent of the members of the away crew of the Enterprise who were not in the main cast.

Okay, this is a silly film, granted, but as giallo goes, it is a fun flick that will fill an appetite for this genre. Yeah, if you’re a fan of these films as I am, leave your suspension of any disbelief before you slip this disc into your player, and you’re bound to have a fun time. Oh, here are some official things to note about this particular release: it’s in both DVD and Blu-Ray, it’s the first release by new company Midnight Legacy (let’s hope they let a lot more come our way), and it’s widescreen, taken from the original 35mm negative (rather than just copied from one of the myriad of VHS releases) They claim it is the most complete version available. All good news for giallo fans around the world.

So, grab some ‘corn, because it’s just what’s in order for watching this release.

This was originally published on FFanzeen.blogspot.com

Posted by Robert Barry Francos at 1:01 AM No comments:

Images from the Internet 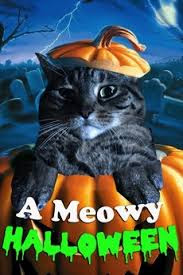 A Meowy Halloween
Directed and edited by Steve Rudzinski
Silver Spotlight Films
48 minutes, 2018
www.silverspolightfilms.moonfruit.com
https://www.facebook.com/SilverSpotlightFilms
Yeah, I know, this isn’t really the kind of film you’d expect me to be covering. Well, it’s an indie, it has a horror topic, and it’s directed by the creator of the likes of CarousHELL, Everyone Must Die, and Captain Z and the Terror of Leviathan (all of which, and more, have been reviewed on this blog). The fact that it’s geared towards children (kinda sorta) is a positive thing, as it helps bring in the next generation of fans to keep genre films going. Besides, this is also a sequel to last year’s also holiday-themed A Meowy Christmas.

Most of Rudzinki’s stories revolve around a mysterious force that comes from the unknown, or in the case of Captain Z, conjured up, but even then the force behind it is a supernatural entity that originates from occult worlds. 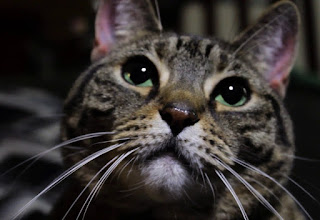 Our main cast of characters in this live action comedy (who we hear think) are a cat named Whiskers (played by Gizmos and voiced by Amie Wrenn), a pet rat who goes by Chuck (Kida, d. 2018; voiced by Aaron Fletchersmith with a cartoonish Noo Yawwk axc’nt), and a human who is a New York City Police Detective called Wally Griswold (played and voiced by Rudzinski). As you may devise from Rudzinski’s character’s name, this film is a non-stop pun mobile. Oh, and Griswold’s police partner is Rick (Ben Dietels, who directed and starred in last year’s horror comedy, Slaughter Drive, also reviewed on this blog).

There are two plotlines going on at the same time, which is never confusing. On the job, Griswold is staking out a house where he believes a witch, Lisa (Cerra Atkins), is doing something nefarious, as kids go in normal and come out monsters. He is obsessed with this. Oh, and Griswold is not very bright, but generally cheerful, which is explained in the film’s prologue.

Meanwhile, the household animals are trying to figure out if the house is haunted, and will go to wild measures and expenses to figure out the mystery. While Whiskers is not exactly anywhere near a rocket scientist (after all, she’s a cat), she certainly more computer savvy than your average kitty; for example, she uses Griswold’s credit card to order a copy of the Nekkomeownicon. But she is also a bit obsessed in her own right with a television show hosted by a guy (Bill Murphy, co-writer of the story) who has his own mumbled and rambling fixation on conspiracy theories (an obvious smirk at InfoWars).

This is a silly film, and is intended to be, as nods of self-reference and word play abound. It’s a kids film the way Bugs Bunny was a kid’s cartoon, with humor that will obviously go over the head of wee ones.

Short and sweet, it’s worthy of a gander if you’re after a hoot, or you have some 10-ish kids around (it may be scary for younger than that, though with what’s available online these days, who knows). It is being made available on Prime Video, free with subscription, or as low as 99 cents to rent. You can get a physical copy from the company website. 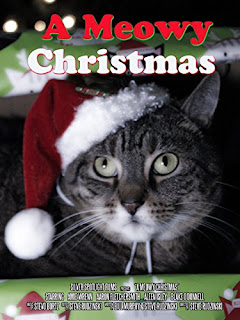 As I said, although this came out first, I saw it second, so please accommodate some of my comments in that direction.

Underachieving and over-emphatic Wally Griswold (Rudzinski) lives in a neighborhood that is being besieged by robbers during the holidays who like to open the Christmas presents and they pick and choose what to take. Meanwhile, one of the victims, Irene (Renee DiAlisandro) has asked Wally to watch over her family heirloom, a huuuuge ruby worth… a lot.

The two burglars, Barb (Aleen Isley) and Larry (Blake O’Donnell), get wind of this, and decide to make the Griswold household the last stop down the chimney, as it were, and get the jewel as they head out of the country. However, they don’t realize what they are up against with Wally’s pets: Chuck the rat (voiced by Aaron Fletchersmith) and the kitty Whiskers (voiced by Amie Wrenn), who has a fear of Extra-terrestrials taking over the world thanks to the InfoData show she watches, misunderstanding the term “illegal aliens” (again, she’s a cat)

Both films are full of references to other ones, such as part of this nod to Home Alone (1990), but rather than a bratty little kid setting up snares and traps, it’s a cat and a rat. And they’re practically as successful without actually putting the burglars’ lives in danger (seriously, a paint can on a string, Kevin?; you’re lucky you weren’t sent away).

Also like HA, the burglars are bumbling, though not as nasty as Pesci and Stern, but rather are merely more incompetent. An amusing aspect is that Larry and Wally are probably equal on level of brain power, and both get glee out of little things such as opening presents or pets.

Are these two slices of short cinema a bit over-the-top saccharine? Oh, you bet, but because of the context of the film and the way it is written and acted – not to mention it’s short length – that’s more part of the charm than a hindrance.

Posted by Robert Barry Francos at 12:01 AM No comments: