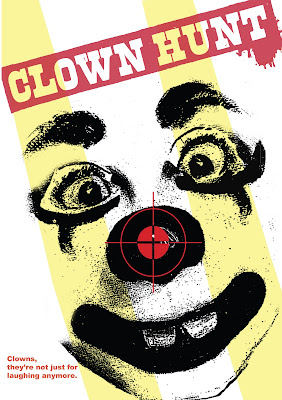 Q: Why don’t people eat clowns?
A: They taste funny.

Actors become directors for a number a reasons. Generally speaking, and not discussing level of talent, the A-list actors have a creative need and/or can find the money because of who they are and they’ve also been paid outrageous fees for their services (e.g., George Clooney, Madonna). This becomes vanity projects for many to various levels of artistic success. For the B-list actors, it’s can be hard to have a career, so why not direct your own films as a showcase, as well as something to do while waiting for a paid part to come in. For the C- and D-list, well, most likely the only way they can find a part is DIY.
﻿﻿﻿﻿﻿ ﻿﻿﻿﻿﻿
Barry Tubb falls directly into the B-list category. He’s been a semi-regular on a number of television fare, such as Friday Night Lights, Hill Street Blues, the Lonesome Dove franchise, and in the excellent Temple Grandin; he has been in a number of high-profile films, including Mask, The Legend of Billie Jean, and Top Gun (as Wolfman). But rather than being up where he belongs, his somewhat stalled career has led him back to his own state of Texas, and directing (as well as appearing in) his own film. This one is recorded in Tubb’s home town of Snyder, ‘bout a hundred miles southeast of Lubbock.

And what better way to get some directing steam off than with a horror comedy, such as this one? The thing about this sub-genre is it leaves lots of room for both social satire and broad comedy, and this particular release has plenty of both. In fact, it seems like it can’t make up its mind which one it should be, but to tell the truth, when you’re talking about something like clown-hunting safaris, that’s okay.

The premise is simple: a group of guys (and a cute gal who mumbles an awful lot) get together and go huntin’ for clowns in Texas. Apparently, they run in the wild, and one can obtain a license to hunt them (happy clowns only in the first week, then sad clowns after that). Of course, the real question is who is the real clown, those in make-up or these buffoons?

When the humor is at its broadest, the silliness comes out, such as having the television station reporting on the expedition be KLWN, or the hunt taking place at the Chuckle Ranch. The clowns, however, live in (as the sign states) “Giggletown, USA.” Sometimes, there are actual jokes, such as the one at the start of the review (which is said twice), or someone asking what were Elvis’ last words, being “Corn? I don’t remember corn.” But sometimes it’s quite witty, such as a bumper sticker that reads “Got Clown?” or the clowns pooping jelly beans. One of my favorites (and also repeated more than once) is the mention of the clown hunting magazine, Big Shoes Big Guns.

As for the social commentary, well, sometimes I wasn’t sure if it was making fun of things like the huntin’ mindset (as stand-up comic Eddie Strange once pointed out, is different than “hunting”), racism (“they don’t want to be called clowns anymore, they want to be called Comical-Americans”; or one of the characters being a “closet clown”), Texan fear of socialism (mocking of the Austin Communist Nation newspaper, where out of context one of the hunters shoots the movie critic, surely a personal wink-wink of Tubb’s), or social activism (protestors have signs like “Hunt Clouds Not Clowns” and “Save the Sillies”). For the latter, I was expecting some kind of PETA-style acronym, like “Clean Land of Wandering Ninnies.”

A sort of subtle possible nod at that huntin’ mentality, at least for me, is when the hunters shoot up an outhouse. I’m not sure if this is a regular southern thing, being the Yank that I am, but I do remember driving along Skyline Drive, in the mountains of western Virginia, and nervously seeing the door of a woman’s outhouse at a rest stop full of buckshot.

While there are lots of shootings in the film, there is very little blood or gore. Most of the hits are in the distance, but if someone is shot in the head, for example, there’s just a smudge at the entry site. In this frame of reference, this is a comedy rather than a Texas Chainsaw Massacre… come to think of it, that film was actually not very bloody either, if you look at it again, but was certainly a lot more gruesome than this one. Also, there is no real nudity to talk of, despite the three sex scenes, including the rape of a hunter by Albino Willie, played for laughs. Another moment is the less-than-subtle homo-erotic skivvy-donned male hunters who mud wrestle.

Despite all the groaners, this is a fun distraction that can appeal on a number of levels. Of course, if you have Coulrophobia (the fear of clowns) there are also two ways this can be taken: either it will be a joy to see clowns being killed, or, well, there are many, many clowns!. You’ll have to let me know which side of the coin you fall on in this situation.

The acting level is pretty good for an indie film, including a cameo by fellow one-time Patrick Swayze look-alike, B-to-C-actor David Keith. There’s definitely some scenery chewing, but nothing on a John Lithgow sit-com ac-ting level.

There are only two things that actually annoyed me about the film. First, and the least of the two, is the really bad rap song, “Killin Clowns” by Lil Endnz, which is played during the credits. Even for a rap song, it’s pretty awful. One would think that since we’re dealing with some good-ole-boys, there would be a bad country tune instead. The second is the very end shot, which makes no sense to me. Perhaps it is a reference to freedom? Freedom lost? I’m not sure, but I’m not going to go into detail and ruin it. ‘Nuff said.

The only extra is a “Slideshow” of behind-the-scenes stills from the filming. A commentary track by Tubb to explain his motivation of how to look at the social context would have been appreciated, or even including the trailer.

Still, this was a nice job. Not Clooney or Eastwood level, but a fun project nonetheless, surpassing other comedy horror films I’ve seen lately, such as ThanksKilling. An enjoyable diversion on a rainy weekend afternoon that is worth a giggle.


Bonus Video (A film by Trick Kelly, who also plays this character in Clown Hunt, as well as the lead anti-hero, Albino Willie):