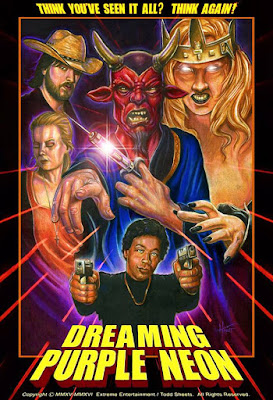 Fanzine publishers know it. Self-recorded musicians know it. So do indie film producers and directors. It is the knowledge and experience that sometimes you just have to go all in: take out the credit card, empty the bank account, fuel your dream and take a shot. It’s about putting into reality what you visualize in your head.

Thus is the micro-budget Dreaming Purple Neon, which went from Todd Sheets’ wallet to being available on VoD since Halloween of 2016. The thing is, experience has shown me that when it comes to indie…well, anything, some people know how to make the best of their finances by stripping down as much as possible (single room, minimal number of actors, shot in their own houses, for example). Others try to overdo it, making up for what can’t be afforded to be made up for more readily in digital post-production. Then there are the Todd Sheets of the world, who know how to work the balance between the simplified and the over the top digitalization.

Man, I don’t know how they did it with such a small budget, but there is a hell of a lot packed into this film, which looks way more than its budget suggests. Sure the acting is somewhat questionable (as with many indies), but the sheer size of the cast is amazing. The body count alone is bigger than most productions. Sure there is a lot of digitalization in the last 5 minutes (which looks great, by the way), but most of the gore – and there is a hell (pun intended) of a lot of it – is appliances and real liquid (as opposed to digital spray).

I’m kind of jumping ahead of myself here, but let’s get back to basics, namely the plot. There is a new recreational drug on the market called, of course, Purple Neon. But its root is even more nefarious and diabolical than just greed, which we also see in abundance. The focus is on a couple of drug dealers (while I’m not happy that they are Black, which can be interpreted by us PCers as stereotypical, they are not the only actors of color, so I’ll let it slide) in Kansas City, who are after someone who nipped their stash. [Postnote from Todd Sheets: "Ricky (Farr) was a manager at a chain store and he had a dream of playing that character, so I kind of tailored it to him, and Antwoine (Steele) has worked with me for 25 years and he wanted the part of Ray Ray to prepare for a similar role in a script he has been writing for a few years that I am going to produce for him."]

In a separate story, which you just know is going to link up with the other, poor lovesick Dallas (Jeremy Edwards) has returned to town, mooning over his lost love Denise (Eli DeGeer). I’m assumed he’s named Dallas because he wears a wide-brimmed hat, which is weird considering he’s from KC (though the name of the town is never mentioned). Anyway, with the help of his bestie, Chris (Grant Conrad), he’s out to see how she’s doing.

The catalyst of all the action, or the fork in the road of where the stories converge, is a demon-worshiping cult in a magical and unending basement that reminds me of a theme from Grave Encounters (2011), which is a link to hell. There are some other homages as well, to the likes of Hostel (2005), Demons (1985), and even arguably Goldfinger (1964), but nothing that really feels like a rip-off.

Even with the rubbery looking internal organs (there’s one intestine that looks like it was used a few times), the gore effects look pretty decent, and I’ll always go for appliance over digital. Lots of blood and gnawing and tearing with teeth give it a smile-inducing factor (for me). As the film flows on, the level of blood (and other secretions) pours even more.

Usually, I posit that indie films that are over 90 minutes really need to do some editing to keep interest keen. Now, at 111 minutes, this film could arguably use some trimming, but to be honest, it went by pretty fast as the pace of the film – especially the second half – is pretty consistently on a fast track.

Points of contention? Well, as I said, some of the acting is not very strong, and the two romantic leads are lacking in the chemistry department, but I like that most of the cast look like everyday people as opposed to prom queens/kings (one of the exceptions being the sultry Millie Milan, whose character is key to bringing all the storylines together). There is also one plot question which baffles me, and I’ll try to say this without giving away anything substantial: when a character leaves behind some drugs, why not keep the guns, considering the situation? Now, if that’s the worst I can come up with, well, this film is more than just leaning into the positive side.

I didn’t know what to expect walking into this release, but I was more than pleasantly surprised by how much fun it is. From the first scene, which always has to have a bit of violence in it to bring in the modern, jaded audience, we are pulled in, and even most of the expositions move at a decent pace.

The sets are interesting, as well. It’s obvious the scenes in the Dentist’s office (said DDS, played by Nick Randol, is possibly my fave character: unassumingly nerdy – despite the numerous tats – with the heart of a warrior) is an actual location, as the real dentist’s name is still on the door; I Googled it, which is how I knew it was in Missouri. The basement sets are cool and dark, but with decent lighting so you can see the action. The editing is sharp, with the occasional extreme-close-up that hides the ultra-violence, but again, overall it is very well done.

Other than a couple of moments here and there of “hunh?” dialogue, most of the storyline works well together, bringing it to a satisfying conclusion (watch past the credits for some eggs). The pace, as I said, is just right, which makes the few weaknesses here and there less egregious and forgivable.

There’s a fine line here walking the artiness of the whole gizmigollogy that still maintains its meat’n’taters horror base, which is where I like to go. Yeah, stripped down has its place, but when you add a flair to it, especially when dealing with a single camera, it’s the mark of a decent director.

If this is the kind of output Sheets can manage with a micro-budget, with some decent funding I bet he could open up the seams even more, and give a great bloodletting story that would soak your socks.