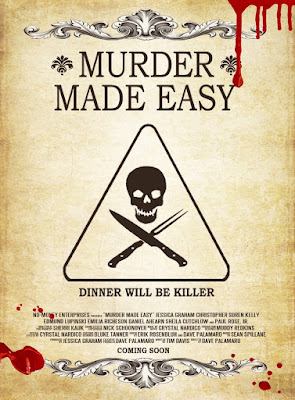 I found it kind of humorous, for a number of reasons, that part of the story in the film sprung from a previous play production of Agatha Christie’s The Mousetrap, in which many of the characters performed together a few years earlier.

First of all, the whole film production reads like a play. It’s heavy in dialogue, mostly takes place in a single room, and the pacing of the whole thing could easily be mounted on a stage. As far as Christie goes, this also feels very Frank Capra-esk in the way the words are spoken in a quick and light patter. This murder mystery has been compared to the game Clue, but I definitely believe that it’s more the source material of the dining room murder mystery that they have in common rather than the end piece.

In a theatrical way, there are title cards announcing the various acts, and there’s even an intermission (albeit brief), which helps keep track of just where the viewer is in the process, and also giving us some point of reference about both the story and the food.

Did I mention the food yet? There’s plenty of it as we watch course after course being consumed, each one unique and all looking very tempting – and occasionally healthy.

This is a very dark comedy. How dark is it, I can hear Ed McMahon asking in my head? If this film were chocolate, it would be 90% cacao or more. Of course, that is definitely part of its charm. Like most murder mysteries – again, let’s use Christie as an example – there are a lot of characters most foul, and even more important, there is double-crosses upon double-crosses.

In the story, Joan Chandler’s (Jessica Graham, who is also one of the film’s producers and published author of a non-fiction book on good sex) husband Neil (Neal?) has been dead for a year. Not happy with the way her husband was treated by his friends, she and mutual pal Michael (Christopher Soren Kelly) decide to take matters into their own hands, and make things right by… well, the title is more than just a hint.

Each of the guests, who arrive in serial fashion, are acquaintances of Neil, who have either worked at the Theater Department of the local university, and have all performed as a troupe in one of his productions. Guests are an amusing yet annoyingly self-righteous vegan (Emilia Richeson), a self-quoting psychobabbling passive-aggressive author (Sheila Cutchlow, who also is actually a published author), a not-too-bright wannabe documentary filmmaker (Daniel Ahearn), and a co-professor (Edmund Lupinski). Gifting each of their dinner companions with objects that were Neil’s that reflect just why the widow feels slighted on his behalf, it isn’t long before things get pretty tense.

The cast is really tight, like they’ve been doing this particular piece for a while. Solid professionalism. While there are some standout performances, there is not a weak moment in the acting, from opening scene to close. That being said, it feels like the camera loves Graham and either keeps gravitating to, or lingering on her. Luckily, Graham can handle it, as she says so much with a snide smile, a frown, or a subtle shift in mood. Kelly is the yin to her yang, a ball of kinetic energy to her nuances. They spin around each other like a double helix, boosting each other’s characters.

Of course, though it needs not to be said if you are at all familiar with the style, little is as it seems. There is a lot of smoke and mirrors, as there should be in this kind of story, and I recommend giving yourself enough time to watch it twice, to catch all the – err – clues you may have missed (I would say the same about some of the more extensive Christie pieces).

In case I haven’t made it clear, this is a strong and solid piece of work. The writing is crisp and sharp as a razor, which never takes the easy way out, even by the end (which, of course, I will not give away… no spoiler alerts). Considering the confined space, the camera does not feel claustrophobic, which is quite the accomplishment in itself.

With the large amount of bodies piling up in corners of the house, there actually is very little blood, and the violence is often blocked by the way the shots are – err – blocked by the director.

For a set piece with a lot of dialog and extremely lengthy shots (i.e., less editing), there is also enough of a high energy level to transfer to the viewer so it doesn’t seem as static as it actually is onscreen. While I tend of find Christie a bit tedious, the pace remains fluid rather than stodgy even though this is kind of modeled after that paradigm, so I was riveted by what was unfolding before me. This is an example of good filmmaking.

The only negative I can say about this movie is that I can almost guarantee you’re gonna be hungry, and for something more substantial than fast food. Like this film, which is a fine vintage, quality stands out.

Trailer is HERE.
Posted by Robert Barry Francos at 5:39 PM