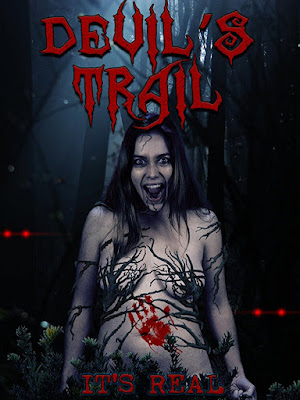 The New Jersey Devil is rumored to be in the wild nature preserve called the Pine Barrens, which occupy the lower southeast third of the state. You never heard of the creature? Where did you think the name of the hockey team came from? Nearly every state has its own version of the Yeti, or Loch Ness Monster. In Joisey, it’s da “devil.” You can find out more about it on Wikipedia, but I digress…

For our story here, we meet Dallas (John Bradley Hambrick) and Hank (director Henrique Couto), who are filming themselves for a survivalist show, where people live in the wild for 21 days with only three items. Even though it’s October, no one thinks of gloves (which is actually addressed in the story), but again I digress… The spot they choose, of course, is the rough and tumble Pine Barrens.

As they stumble around, increasingly getting on each other’s nerves (as familiar companions do), they try their best to find food and water, goad each other, and run into some nude witches. Oh, didn’t see that coming? First day out (and very early into the film), they find themselves in the company of some “Wiccans” (as our intrepid wannabe heroes call them; the women sort of shrug the term off) in the middle of a ceremony. Other than the nudity, they do serve a few purposes to the story, including filling in the role of the “locals who warn.” Rather than the old guy or the gas station attendant who says, “Turn back before it’s too late!!!” these women (Joni Durian, Rachel Redolfi and Erin R. Ryan) take the role on with their robe off.

As the guys wander over the river and through the woods to eke out some kind of reality star existence, there are the red eyes and screaming in the woods at night that only one of them sees (along with us).  The other meets this with skepticism; is he playing some kind of joke on the other? Well, the title cards at the beginning and night vision camera sensors tell the audience that there is something else afoot.

Yeah, this is a found footage [ff] release, and if you’ve anywhere familiar with my reviews, you’ll know it’s not one of my fave subgenres. But before you think, “okay, he’s going to tear this release a new one,” it’s actually quite good. I’ve had a discussion with Couto about ff, and we generally agree on why it’s a pain in the ass, and he does quite well to avoid many of the pitfalls. For example, rather than just having a camera with batteries that are never exhausted, as most of them do, Hank explains that he has 21 days’ worth of batteries in his backpack. And while there is some running around in the wood in the dark, rather than the light from the camera, they actually have some decent flashlights.

What’s also nice is that they both have tripods which they use as selfie-sticks held to their waists. We get to see the flip back and forth between both cameras, and it’s easy to tell which we are watching because one has more of a blue filter, and one is skewed towards a yellowish green.

The cast and crew is part of an Ohio group of filmmakers centered around Dayton that often work together (e.g., Ryan is in many of Couto’s releases), so they have a way of playing off each other that is an advantage to the audience, not to mention they all have some skill in improvisation that gives more of the feeling of spontaneity than just sounding stupid and uncomfortable with dialog, as do many freewheeling ff films.

As with most ff, there is a lot more footage presented between the red eyes and people appearing out of nowhere, but they fill that gap with giving tips about surviving in the wilderness, which is actually more interesting than sheer nonsense time filler. You get more of a feeling of being with them, rather than spying on them. This is something so many ff releases lack. Usually, by the time something happens, I’m bored, but here, the interest is kept present by the two protagonists.

Through all the squabbling and breakdown into insanity over time, stick with it, because the ending actually took me by surprise – in a good way.

What I like about Couto as a filmmaker is that he is solid meat and potatoes. He doesn’t go in for the Fancy Feast, he goes for the Purina, meaning he tends to strip the story down to the bare bones and gives us something to gnaw on. Be it a western, a love story or horror, whatever the genre, he sticks to the essentials, and the film is the better for it (and having the talented Ryan in most of them doesn’t hurt).

Couto has been doing more acting lately, including in other director’s works, and the practice carries over into his own films, as he is one of the two leads here. Both him and Hambrick hold the story and present a solid package. Yeah, the genre still annoys me, but it’s great to see someone actually using it well.

Posted by Robert Barry Francos at 2:01 AM