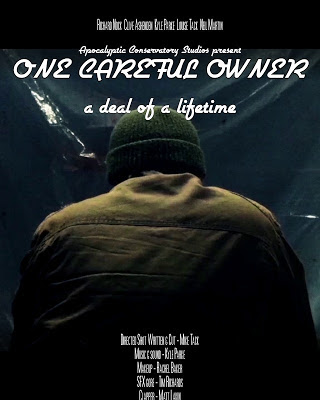 
Mike Tack is a new director on the scene, and as in the case of many others going for the solid reputation (i.e., serious films, rather than comedies or “quickies”), he is starting off small, with some shorts to use to gain backing for a full feature. Something tells me that it could well happen based on what I see here.


Considering the length of these two excursions, Tack manages to get the most of his stories and actors. His pace is consistently strong, his editing even, and the films look better than most. They are both dark tales involving some form of social justice to the extreme.


The reasoning for the comeuppance is plausible, but the extreme measures taken is what will get your attention. The intense and excessive level of violence and gore, shown in detail, is what will get these films noticed as much as the reason, the story, or the director’s skill. It’s amazing what can be done with a rubber band, a Q-Tip, or even a chisel. The carnage is realistic, the intent is to inflict harm, and the thrill given to the viewer is, well, that depends on your “winch” level. Mine is high, but I still squirmed at certain instances. That is credit towards this Kent, UK, director’s aptitude behind the camera.


In One Careful Owner, it’s easy to tell who the intended target is, and from the first scene, you know he has it coming. The why and how is what will grab your attention. Who doesn’t want a scuzzy used car dealer to see the error of his ways, especially if you’ve dealt with an unctuous one (I’ve been pretty lucky, but I digress…). However, we don’t learn why the focus of The Domestic is getting the treatment until much later on, but I guarantee it’ll stick with you and make you think twice. Because we don’t know the circumstances of the actions until the conclusion, it separates the reason from the harsh physical actions, making the encounter all the more “squishy.”


I have two hopes for Tack, given these two shorts. First, I wish him well in getting the funding needed for present us a full length film. I’m interested in what he does with the time between the red stuff. Second, I’m hoping he keeps making shorts because I know I would enjoy seeing his progression from film to film, considering his growth between these two, which made within a year of each other.


The complete The Domestic