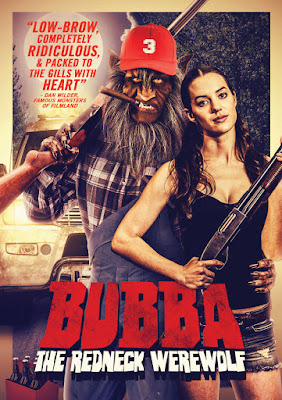 Southern humor has been the subject of film fodder for decades, at first sequestered in the Drive-In circuit, but breaking out into the mainstream in the mid-sixties, with Smokey and the Bandit stoking the fires to big box office.

Most films with a Southern fried bent tend to be political dramas, murder mysteries, or balls-out/boobs-out yee-haw broad comedies. From the title, I’m going to assume you realize that this film doesn’t fall into the “political” or “detective” range. After all, one of the first images you see is a sign that states, “Beware of dawg,” in front of the Barkham Asylum Dawg Pound. While I was totally impressed with that pun, that does tell you which kind of swamp you’re putting your steel-toed shoes into. It should be noted, at this point, that this is based on a comic book series that originated in the 1990s, which would explain a lot.

Filmed in Deland, FL, about halfway between Daytona Beach and Orlando, the story all takes place in Broken Taint, Florida, part of Cracker County, where the drawl is deeper than the thoughts. Which brings me to our hero, the shlubby, balding and thick as a stump Bubba (pre-werewolf Chris Stephens), who works in a go nowhere job (happily), hangs out at the local saloon to buy the cheapest booze they have, and has an unrequited love for Bobbie Jo (Malone Thomas). But she’s involved with town bully, Dangerous Dwight (David Santiago), a man who proudly knows how to cut arm holes in his shirts. Bubba will do anything to get her back, including making a deal with the Devil (excellently played by Mitch Hyman, also the comic book’s creator), who turns him into the titular wolf-man (post-wolf Fred Lass). Now, this isn’t a Lawrence Talbot full moon kinda werewolf, but rather one who is in the skin, as it were, permanently. Is he scared? Is he evil? Does he terrorize the town? Hell, most people think it’s pre-wolf Bubba with a beard. Ironically, the only one who doesn’t recognize him is Bobbie Jo! And now that the Devil’s in town, he’s going to make due.

The humor here is quite broad, and definitely geared towards a certain audience; it’s completely Trumpville, as equating college students with zombies, and Bubba makes a meal out of a “liberal Democrat” (off-screen) as a throwaway punchline. Even so, this is quite funny. I’m sure there’s a joke or two I didn’t get as a New York liberal Democrat, but all of it still comes across as good natured and fun. Speaking of which, make sure you read all the posted signs that appear often throughout the film, even if you have to freeze-frame, or rewind a bit. 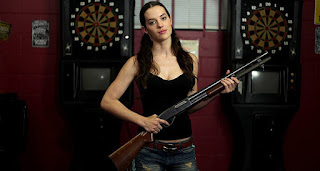 Some of the cast comes across as locals of where it was filmed, and many parts are the actors’ only IMBD listing. Either this is a relatively fresh cast, or they are using pseudonyms due to the title. Even so, the acting is quite at the right level (though the one really over-the-top is humorously done by the director himself). In a broad comedy, however, this is a given, so I had no problem with any of it. It should also be noted that some of the cast was also some of the crew. It all part of the tight-knit world of indie filmmaking that I love so much.

This whole creature feature is not really scary, but I wouldn’t necessarily recommend it to young’uns for the following reason: while there is no nudity, there is a lot of innuendo, and plenty of blood and gore. Sure most of the splatter is highly digital looking, but it is still effective, and that doesn’t count some of the more gruesome appliance effects, which look really good. The gore aspect is not surprising considering it was written by Stephen Biro, who directed the intense American additions to the Guinea Pig series. Of course, however, this being a broad comedy in the modern period, there are the fart jokes, the vomit jokes, the drool jokes, and the ones involving (dog) shit. Again, appropriate for the genre.

What about the werewolf, you may ask; how did he look? Quite decent actually, in a non-threatening way. Wouldn’t want to meet him in a back good, but in this context, he’s a happy camper to be around, as long as you don’t try to mess with him. The make-up was designed for the actor, who manages to show emotion through it, which is a compliment to Lass. The overall appliance is okay, but he makes the most of it.

The humor is broad enough that it can incorporate other nods, such as one to Abbott & Costello, which fell a bit flat to me. But at the same time, when not dealing with bodily fluids (and gasses), the humor is quite warm and works well, usually. I have to give a nod to the music by the Blast-Offs. Their stuff is a mix of rockabilly, old time country, and those “Hot Rod Lincoln” kinds of talk-songs with a doot-doot-doot backbeat.

For extras, and there are lots, so let’s start with the 16:08-minute “From Page to Screen: the Making of Bubba the Redneck Werewolf.” It’s the usual mix of on-set interviews, behind the scene b-roll, and covers several topics, including the stage from comic onward, the make-up, the music, some great anecdotes, and reactions by the cast/crew. It was all so very well done so that I enjoyed it throughout the length.

Next is a sweet and neat 2:39 minute Blooper Reel, and a 3:03-minute Deleted Scenes. While I agree with all of the snips, I’m glad they put this in. Doesn’t add anything to the story, but still sets some nice moods.

Lastly, there’s the Make-up Process featurette at 2:37, which is b-roll played over some of the Blast-Offs material, the title song video again by the Blast-Offs that is made up of a mix of behind the scenes b-roll and film clips, and the trailer.

I would like to add one final thought, and no disrespect is meant for anyone, but if I was a fictional character living a fictional life in this fictional town, and I would have walked into the bar where most of the action takes place, my choice would have been to cozy up to the bartender, Jamie Sue (Sara Humbert). Just sayin’.