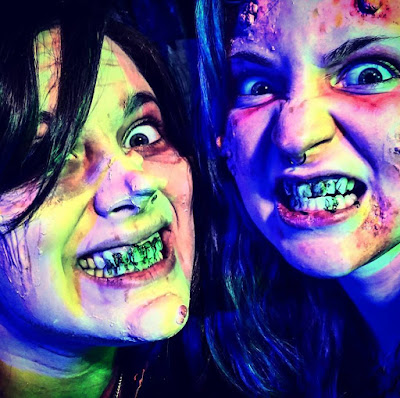 Dave Parker, aka MrParker, has earned a reputation as a film collector / vlogging reviewer, and now he’s moving well into writing and directing for his second release, under the tutelage of a master of the micro-budget genre, filmmaker and puppet creator Dustin Wayde Mills. They’ve been friends for years, along with stalwart actor / writer Brandon Salkil, working and playing together into a cohesive unit. 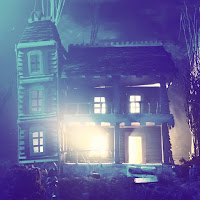 After a nicely done first-person intro that goes from day to day-for-night to a cool model house, we meet two witches (Joni Durian and Haley Madison, who was great recently in CarousHELL [2016]). In order to keep our protagonist to stay until a potion is ready, we get the three stories in this anthology.

First up is “The Babysitter,” a play on the bad guy in the house theme, but also takes from the news of weird people dressing like clowns to scare others. It’s kinda goofy, in a good way, and we certainly get a result of what could probably happen in real life. The two kids in the story are excellent, as is B.J. Colangelo in the titular role. She ain’t no Mary Poppins, that’s as sure as the kids aren’t the Banks children, either. For a story geared for the young’ns, there is an effective level of suspense for everyone. 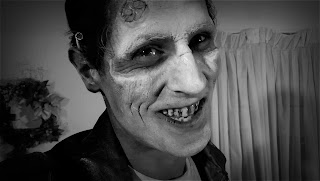 The second tale, like the first, is directed by Mills, who happily goes back to what he built his early films on, which is a peculiar level of ironic humor. Here, he takes on the black-and-white tale of some schulb (Mills’ regular go-to actor, Salkil, the writer of this piece) who is visited by “The Messenger,” a ‘50s leather jacket-wearing Juvenile Delinquent spirit played with fervor by Parker. The gross-out level is high here in a kid-friendly-yet-icky way. What stood out for me is that both actors played against their own type. Salkil tends to play – well, yes, schlubs (not counting Skinless) or raving maniacs, but here he is more subtle, showing some more depth than usual (knew he had it inim). Parker, who tends to play more constrained characters, plays his role appropriately over the top in a way that is broader than I’ve seen him before, showing he’s got some chops that go beyond his online film reviews as MrParka. The story has a good youth message about not giving up and persevering, no matter what comes knocking in the middle of the night.

The main piece, though, is the third tale, “The Familiars,” is written and directed by Parker, who also plays a pizza delivery guy. So, one of these two not-to-bright comic nerd guys (kind that still live at home way past their due) decides he wants to join the local gang, The Cruising Bruisers. But as one of the two notes, “They don’t even ride!” Now, this gang is, well, beyond dunces. There’s the leader (Salkil in full jagged-up mode), a metal-head who only says “Metal” and makes the two-fingered sign named Devil Horns (Mills), and one who amusedly only speaks in very poor Spanish, named Macho (Aaron Anthony). Calling these guys idiots would be an insult to idiots. 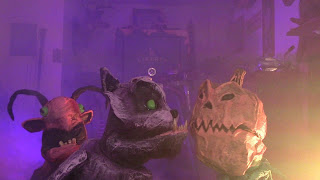 The two doofus dweebs perform an incantation from a book similar to the one in Evil Dead, except that this one looks like it has the image of the demon from Mills’ Easter Casket (2013) on it. Mills got his start making horror films dealing with puppets, and he contributes his skill to Parker’s vision by creating three demons right out of Ghoulies (1984), one of which looks really cool (the cat), and two others that are more leaning towards the Paper-Mache, but hey, still good-if-not-better than the Ghoulies’ rubber models.

With a nod to the Three Stooges – or as Macho might say, “La Tres Estupidos” – the tiny creatures go on a rampage of killing, with a decent amount of a body count considering the age-level for the film. At half an hour, this is the longest bit, and a good companion piece to the other two (and witchy wraparound, of course). This particular story is a bit more violent and raucous than the others, but nothing that can’t be shown on television uncut (or hasn’t been of late), with possibly one exception, which involves the mentioning of a succubus. Now, even Bugs Bunny used to have a touch of adult humor it in (sexy cross-dressing Bugs or Elmer, as an example), but those days are questionable now. I mean, violence has always been more accepted by mainstream media than, well, (read as sotto voce) S-E-X, or in this case, being implied.

I would say the age level for this film is arguably over 10, when one considers the gross-out level (albeit mild), the demon killings, the use of the word “crap” throughout (the strongest cuss word here), and that one character has a cigarette (always unlit) usually dangling from his lip; that being said, I remember the media uproar on television in the 1980s when a child character said something like “bite me” to her bothersome brother. It’s a new world, folks, and thanks to streaming services, kids are more accustomed to things we didn’t see as a youth (which makes me think of Neil Postman’s 1982 treatise, The Disappearance of Childhood, but I won’t get all theoretical on ya).

This is an enjoyable release, and I’ve seen lots of good words about it around the Interwebitivity, and rightfully so. It’s funny on many levels, from goofy and slapstick to “oh, yeah” connections that you’ll get even if the kids won’t. It’s fun, it’s free, and it’s worth a view for children of aaaaall ages. C’mon, whatcha gotta lose?
Posted by Robert Barry Francos at 10:13 AM