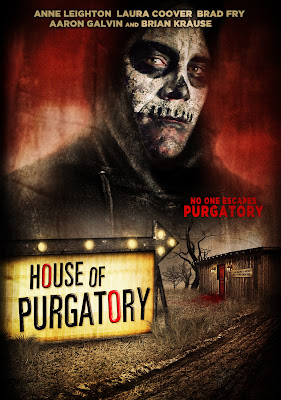 
As I’ve oft said, tangle up enough well-worn tropes and you may find yourself with something unusual. This one has a blast of ‘em, from structures that appear out of nowhere and are (of course) evil, to malevolent forces that know your secrets and fears, all based around a couple of couples of overaged actors playing high school teens on a road trip. This I get from the trailer, alone.


Halloween “haunted house” attractions are becoming increasingly popular. A truly haunted one is almost too good an opportunity to miss. Location? Unknown. That’s where the road trip comes in, of course. It sounds like a supernatural Talon Falls, but we shall see.


After a nice jump start, we are introduced to a group of high school (have to stop here to giggle) students who are partying on Halloween. Four of them decide to find the urban legend Halloween house that pays you back if you make it all the way through.

﻿﻿
The first couple is Amber (Laura Coover) and Ryan (Brad Fry). He’s the instigator and a bit of a macho dick who pressures everyone to keep on a-goin’. Amber comes from a religious family and we actually don’t learn too much about her, but more on that later.


The second couple is “nice guy” Nate (Aaron Galvin) and the unofficial star of this short feature, Anne Leighton. I guess she could be considered the level-headed one, but she’s in the same sitch as the rest of the kids [giggle].


When they do find the House of Purgatory, whether it’s the place of the urban legend or not is unclear, which is a wise choice on the part of the filmmakers, we learn that it is being run by a guy with a skull loosely painted on his face (Brian Krause, who in an extended cameo, is the biggest name in the cast, having been a “Whitelighter” on the television show “Charmed” for years) a la Captain Spaulding of Night of a 1000 Corpses (2003).

﻿ The House also knows your deepest, darkest secrets; says that right on the entrance. However, we know little about this band of fodder for evil purposes, so while we learn their secrets eventually, fortunately we are given a miniscule portion of what their life is/was like, and what brought them to that moment at that point. What bothered me, though, is that in two cases, their “secret” is/was not a choice, but something that is/was put on them. No spoilers promise.

Which makes me wonder about the backers of this film. One could actually see it as a “Christian” fear theme sub-genre, with punishments that go beyond the deeds. In some cases, it seems like the parents are the ones who should be there, rather than these teens [giggle].


I’m also a bit annoyed at the throwing around of words like “gay (as in “that’s so gay”) and “retarded.” In the right context I don’t have a problem with the use of the words or not, but in this case it took me out of the moment, which is what you don’t want to do when watching a film, especially a genre one. For example, wondering if a particular character is gay because he’s nice is, well, whatever. But the “that’s so gay” is tiresome and passé.


Okay, so I’ve whined a bit upfront, but that’s not to say there aren’t some really fine touches throughout. For example, when our foursome finally do get into the Shed of Purgatory (you’ll see what I mean when you watch the film), there are different floors leading downward. Wisely, it starts slow and then continues to build tension as different floors are reached, escalating to a couple of perfectly pitched lulls in the bam! excitement level, letting the tension build again. No constant clobbering over the head, this is more like riding the waves. And yet, the angst remains in both the confusion of the characters and for us as everyone tries to figure out the characters’ next step (both figuratively and literally).
Note that there is practically no blood, but the sets look great and the cast is attractive.


A fun game when watching films like this is to “guess the references” to other genre films whose tropes are present. For example, there is one key element here from I Know What You Did Last Summer (1997), and a bit from the Sarah Hyland horror (read that as you wish), Satanic (2016).


The film is short at 75 minutes, and it could have been beefed up just a little with some expository info about the background of the characters, rather than just at the point of the secret revelation. That being said, there are also other parts that could have been cut down a bit, such as much of the pumpkin carving scene.


The extras are sound choices, chapters, captions (for which I am always grateful), and three trailers (one non-genre, and one for this film).


This is what I call a serviceable story. What I mean by that is that it’s not rocket science, but it does its job of being entertaining. Sometimes that just what a viewer needs when dealing with characters that are teens [giggle].

Posted by Robert Barry Francos at 12:01 AM