Review: Chills Down Your Spine 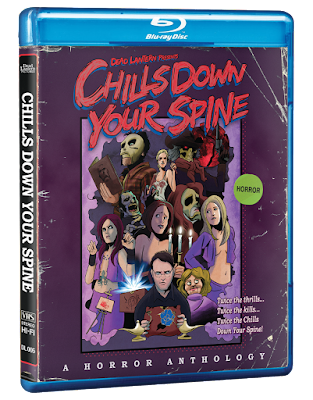 When is a sequel not a sequel? Well, when it can stand alone without seeing the first release, then it can be seen as a sequel or not. Such is the case with this anthology. And when is an anthology not an anthology? Stop asking questions, already, and let me write this review, okay?!?!

This film is a pretty basic set-up as you watch it, but explaining it is another thing. It’s in three parts that switch back and forth, the first two being the bookends (yes, this one has two-two-two bookends in one!). The thirds are the 10 tales of terror (i.e., horror shorts, or the anthology proper).


In the first film, Shivers Down Your Spine (2015), Jeff (Steve Eaton) asks a red-haired and tattooed genie, Sabiah (Megan Garcia) to tell him stories. Note that I have not seen this release as of yet, but the theme of the film continues with not one, but two sexy genies. This time, Jeff rubs the lamp (keep it clean now) and Sabiah’s lookalike-but-blonde sister, Mahktoonah (also Megan Garcia) – shades of “Bewitched” and “I Dream of Jeannie”; did you know both TV lookalikes were created by the same writer? But I digress…) – that Jeff hooks up with as he rubs the wrong (yes, lookalike) lamp. They set out on a “Road Trip” (inspired by The Odyssey, so you know there’s a Cyclops a-comin’, as it’s the one consistency in any story based on the Greek classic, and the other “C” characters, Circe and Cassandra), and while driving, tell each other stories.

Meanwhile, Sabiah has been risen by a masked serial killer who mumbles and grumbles his words (honestly, I can barely make out what he’s saying), using his wish to bind the poor genie. She uses the time to delay by telling him stories (now this is more like One Thousand and One Nights, which is fitting for the genie theme) in the segment titled “C’mon Baby Light My Flame.” Of course, both genies are relatively topless through the bookends. These two bits also recur throughout the film, especially “Road Trip,” as we see variations of different segments of the original’s set pieces.

So, what you have essentially, is three people telling stories. The first one is “The Devil’s Corkscrew,” which is a tale within a tale within a tale. A western which uses the Nebraska vastness to it’s advantage, we meet a group of people who have stolen some gold and are trying to make it to their chosen location, while a dark and mysterious gunman hunts them down. Needless to say, the internal fighting between them is as bad as the stranger that’s searching for them. The unexpected ending was actually nicely done. I also like that they did a regular Western without trying to go for the overdone Spaghetti Western style.

Playing around with genres (an anthology is the perfect way to do that), next is “Isabelle Returns,” an animated story (the work of W. Leitzel) of the raising of a malevolent dead spirit. It’s short and sweet, but very satisfactory. I wouldn’t mind seeing more of it.

For “The Ditch,” it’s a very basic, nearly “Children of the Corn” theme (no kids here) mixed with a bit of Lovecraft and The Texas Chain Saw Massacre. It’s pretty basic with three characters who meet in various stages along a less-traveled dirt road surrounded by cornfields. There might be a surprise or two here and there for the viewer, but this minimalist tale has a nice though easy to see coming twist ending.

Relying on a bit of giallo stylings, “Bed and Breakfast” uses stark, primary colors and tilted angles to set off a mood, as a young woman arrives as said B&B in the middle of a rainstorm. It also has an Agatha Christie feel to it, as it seems to be placed in that time period. Rather than meeting up with Rocky and doing the “Time Warp,” she meets the butler, who is kind a generous, in a stiff way. There is a lot of nakedocity in this one (no, I’m not making judgments), as this is also styled after the classic “Nudie Cuties” of the 1950s and ‘60s (e.g., Hershell Gordon Lewis and Harrison Marks). There’s also a feel of Tales from the Crypt, with at least three really nice make-up effects. 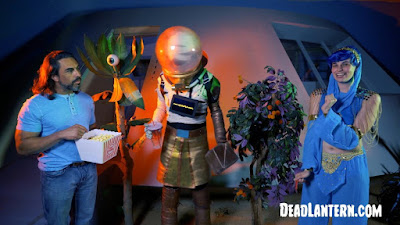 You may have noticed the time length of this film, which hovers close to three hours. Normally, I would whine about most films longer than 90 minutes, but in an “Intermission” segment at the halfway point, the genie-to-be in the third anthology film (to be made) called Tingles Down Your Spine, reiterates what the director states, and in this case I agree; Kister says, “Hey, we’re gonna give people as much content value for their money as we possibly can, and oh, by the way, there is no requirement that anybody has to watch a horror anthology straight thru in one shot.” The intermission is kind of like “MST 3000,” as not only they comment of the film so far, but also they talk directly to the audience (there is also a fourth wall break about nudity early on in “Road Trip” that made me laugh).

Starting the second half is “Hysteria!” Well, right off the back that had me hysterical is that the house front here is the same as in the “Bed and Breakfast” story. Yeah, I do pay attention… This is a comic mixture of a murder mystery, a burlesque troupe, ghosts, and a ventriloquist doll. It’s goofy as hell, and I felt the weakest of the stories. I understand there was supposed to be a “Scooby-Doo” feel to this, but maybe because I’m not a fan of that, I missed the tone.

Settling down for some non-humor (though there is a dark streak deep in there), “Blood Model” presents us with an art class with a nude model as its subject. One of the students is a wacko who is fixated on the model, while others in the class try to cozy up to her. The dance around her by the students is the key motion of the story, but like any good horror tale, but the ending is solid gold, Jerry, it’s gold! It takes a bit to get there, but it’s worth the wait. For some reason it made me feel like it could be a segment of “Trilogy of Terror” (hey, Karen Black did some nudity). 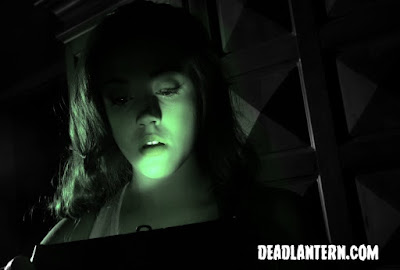 To mix it up a bit, the penultimate story is “The Whirlpool of Night,” which takes a few genres, puts them in a blender and stirs. The predominant one is the black-and-white noir of a crime syndicate, as a private investigator must steal a necklace from a secure location and return it to repay a debt to an all-female mob. This leads to another genre of an action film as she is hunted by a masked assassin leading to shootouts and hand-to-hand fighting (which definitely shows the film’s budgetary restraints). As for the third of the mash-ups, I won’t give it away because it’s completely unexpected and fits in so beautifully. 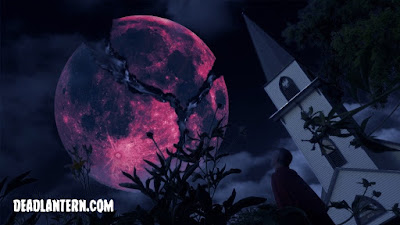 The final story (but not the wrap-up) is “The Calling of Things Beyond,” which is the most Lovecraftian of them all. A cursed play (now there is a well-polished trope) written by a mysterious Alister Crowley type leads to an almost psychedelic happening. It’s both intriguing, weird and a bit silly, all at the same time.

As the two bookends collide in a pretty funny, almost Keystone Kops way, the film sets up for the next anthology. If it is as much of a blast as this one, it will be worth the wait (perhaps in 2022?). One thing noteworthy is that at nearly three hours, there is no big cameo star showing up; that alone is pretty impressive. Don’t let the length intimidate you, it’s worth watching it, even if it’s in bits here and there. That’s the glory of anthologies.