Review: Beyond the Woods 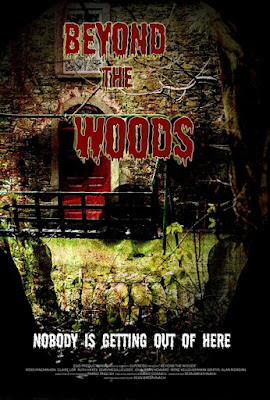 I could be wrong, but I’m thinking that the name of this Irish film is a play on the tile Into the Woods, just further so. If that is the case, I like the pun. After all, the Grimm Faerie Tales were actually mostly horror stories, were they not?

Anyway, if you don’t mind a gross generalization perhaps unfairly based on a limited group, this is the second Irish genre film I’ve seen in the past bit, and they both have one thing in common. Like Don’t You Recognise Me? [2015], the story is taken off a relatively generic formula, and then follows through into its own direction. The other was a tale of revenge, whereas this one is based on the cabin in the woods trope.

Here, rather than a wood shack, it is a very lovely two-story stone house of an age that may predate the US that is the locus of a gathering of seven friends: three couples and an odd wheel who was recently dumped. They decide to get away from it all to this place that was once a vacation home to one of their parents. Their plan is to spend it relaxing, dishing dirt, and quite a bit of the raising of the wrist and imbibing with some other fine substances to alter the mind.

Shortly before they even get there, we learn that a large sinkhole has opened down the way, which releases the bitter smell of sulphur across the countryside. Now, in a genre film, burning sulphur is never a good sign. Before long, of course, they are not alone. There is a figure who looks like he’s covered in tree bark (or dung/mud, it’s hard to tell), and you know he’s up to no good because, again…genre film.

We are told early on, indirectly, just what is behind the hole, the smell and the evil that is in the air the first night when we see a digital clock turn from 5:56 to 666 (no colon) and back. And it is the biggest mix-up that you have ever seen, as the minions of Ole Slew Foot are lurking. Even though we only get to see one demon, that’s surely enough to turn things from a good mood release weekend to one of damnation and death. Again, it is a genre film.

The big bad dude in the cape and hoodie looks like he has bark attached to his body. Though I’m not really sure about that, as we see him mostly in shadow (a smart move, honestly), it would make sense to me, as Ireland is known for its greenery and nature.

Using the mirror-doesn’t-reflect-reality paradigm, we know that the intensity is growing. Tensions begin to rise between the friends and unexpected connections occur to further stress their bonds. What we are left to wonder – again, the right choice – is whether this deep-level angst is normal for this group dynamics, or is it the ever-more pervasive influence of whatever is in the woods.

The tension that builds does so pretty slowly, but not enough to lose the interest of wondering where this will take the viewer. Sure there’s a hint of The Evil Dead and even a bit from Stephen King’s short story, “You Know They’ve Got a Hell of a Band,” as well as other sources, but there is a definite different feel. For example, these are not teens, so the conversation isn’t just wondering about getting laid or telling ghost stories. There is also an avoidance of other stereotypes, like the old guy warning the group, or the jock, the nerd and the homely girl who becomes lovely as a soon as she takes off her glasses, I’m happy and grateful to say. These are adults with adult foibles, and I respect that and enjoy the maturity of what the director is accomplishing (i.e., teens aren’t the only ones that have to worry).

Stripped back in the story and effects, surely due to budget limitations, we don’t lose anything because of that. While most of the action does happen at the rising of the moon, there are mysterious things about even during the day. As time goes on during the weekend, actions continue to ramp up until the third act of desperation and death for… well, you’ll just hafta find out, woncha?

The cast, for once, is populated by professional actors of a higher caliber, so we get some decent playing, and yet not so much experience where there is sleepwalking through the parts. As far as I can tell, as I’m not that up on Irish actors, there are also no cameos by slumming bigger named players past their prime, or cult genre name performers. Happily, his works for the zeitgeist of the whole she-bang.

That being said, the camera does lovingly tend to focus on the diminutive and dimple-deep Irene Kelleher, who indirectly comes out as the “star,” but each character gets their shot, much as a band that has everyone do a solo to show their chops.

While this certainly isn’t a perfect film – for example, if a creature can kill with a mere touch, why would he pick up an ax? – all things considered, it is a well done production that takes what we know and mixes it into a new-ish recipe. Worth checking out.

Posted by Robert Barry Francos at 1:30 AM