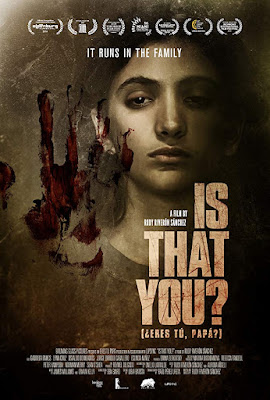 I have been trying to remember whether I have ever seen a film from out of modern Cuba before, let along a horror film. As an isolated island both physically and geopolitically, it kind of makes sense that someone from there might have a different perspective or use some older tropes from the pre-revolution days. Hell, so much of their equipment (cars, motorcycles, etc.) are from that early-to-mid-1960s period.

Actually, just calling this horror isn’t quite accurate as it falls more into the psychological subgenre range, such as Psycho (1960) or Whatever Happened to Baby Jane (1962). It’s a deep look at the goings on with a family living in a shack in rural Cuba, where baseball is still large, and men are kings of their castle, no matter how low many rungs down run the life ladder one is situated.

Dad plays his daughter’s affection for his own gains, damaging her psyche and indirectly using her to control his wife when he’s not around. Lili’s dead eyes give away her own mantle of PTSD. Eduardo even tells Lili that she’s his favorite person, even over his wife. While Alina wants to get away, Lili in her own way is still trapped but can’t see the bars. Her dad has soaked up all her emotions, leaving her a flat line where her heart should be. One could argue that Lili represents Cuba’s isolation amid it’s Latino neighboring islands that shun her.

The film follows the family at a very slow and methodical pace for quite a long time. With hardly any incidental music other than a few snippets here and there, we are also left in a vacuum of time and space. But even at glacial speed and the lack of any real action for a significant amount of time, it’s hard to turn away from the story that is unfolding.

There are two other characters in the story, one being a limping African descendant who works as a servant for Eduardo named Carlos (Jorge Enrique Caballero). He’s a gentle soul who gets caught up in Eduardo’s rage and jealousy. When Eduardo disappears (hence the name of the film), Lili goes to visit an elderly neighbor, Caridad (Cuba legend Eslinda Núñez in a cameo role), to try to bring her father back from wherever he has gone.

Until this point, it’s an intense family drama with some harrowing moments, but the deeper psychology that leans towards horror comes in after the introduction of the Latino religion (some may say superstition) of Santeria.

This family is definitely broken: abusive husband, shell-shocked and physically abused mom, and the hormone-surged teen daughter who is caught in the middle of it all, with her own issues. Of course, as the film goes on, everything gets magnified and more intense until the conclusion, which will definitely remind most of us of another film, but I’m not going to give any kind of reveal.

What I also liked was that there was no pure evil character, but rather time is given to flesh out everyone into a more complex personality. Each has their flaws, and all some humanity within the anger and even the abuse.

The dialogue is sparse, and of course read through subtitles as I don’t speak Spanish. The acting is superb and nuanced. A lot gets said through body motion and expression. There is also a strong use of symbolizes throughout, some more obvious than others, be it the dropping of a rosary or Lily looking at herself in a cracked mirror. The film can be taken on a deep level or more surface glide, but either way, it’s hard to dismiss the story.

For some – arguable most – this will be a long sit-through because the action is subdued, and happens mostly toward the end of the film. But I would stand that the end only makes sense if one sits through the rest, and I found it to be a nice, tight, wire-walk of increasing tension.

Posted by Robert Barry Francos at 12:01 AM