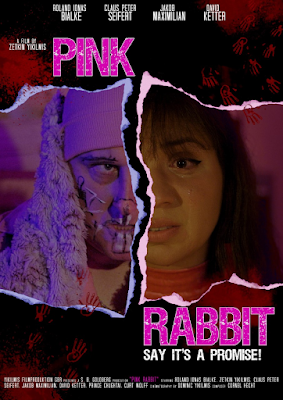 Somewhere in my head, I hear Sly Sylvester Stone’s voice singing, “It’s a family affair…” That is hardly surprising as the star of the film, as Martha, is the director/writer, Zetkin Yıkılmış, her husband is played by her husband, Dominic Yıkılmış (who is also cinematographer), and her kid is played by her toddler son, Emil I. Yıkılmış. Zetkin also fills many other shoes, such as make-up, editing, and art direction. Something tells me this is going to be a micro-budget film. I am truly excited.

From a Turkish background, Zetkin filmed this in Germany, but it is done entirely in English, so for those who are subtitle-phobic, there should be no issue in this department; sometimes heavy accents prevail, though.

We are introduced to the “Pink Rabbit” (Roland Bialke) during the credits – well, his feet anyway – as they stomp on a bunch of flowers. Right from the start, we are told the rabbit is up to no good. And what exactly is the rabbit? It’s an adult male in a bunny suit and exaggerated make-up.

Even from the first five minutes, the film has the feel of a fairy tale. Remember, Grimm’s Fairy Tales by the Brothers Grimm (1812) also came from Germany, and if you had the chance to read the original (or early translations), as I did, they are incredibly disturbing, often containing physical torture, dismemberment, and death to men, women, and children (for example, you didn’t think Hansel and Gretel were the first children in the witch’s house, did you?). It’s this feeling of “magic” that permeates the story.

Martha is a harried office worker who has done so much overtime that she has not seen her husband and child in days. But on her way home, on a lonely road, the real journey begins as she is zapped out of her car by the Rabbit (using ‘80s style CGI), and into the dark woods, where she is held captive by a hunter and his father, and covered in white mice (tell me, that does not sound like a fairy tale to you). But like Dorothy Gale, all she wants to do is go home.

The style of fairy tale includes a chapter where a cabin is run by two bad hunters and potential cannibals, Caleb (Jakob Suchentrunk) and his grizzled father, Kain (Claus-Peter Seifert), where they are holding Martha captive. It is almost like they are in the Middle Ages in dress and house interiors (really good set designing), though in actuality, it takes place just after the end of the American War Between the States; what is odd, though, is that they have a huge Confederate “Stars  and Bars” flag hanging in their living room. Is that some kind of political commentary? There is also an odd conglomeration of American Indian/First Nations culture and one bit of modern technology all thrown in the mixer. The language is also purposely stilted to give it a fairy tale ambience (to paraphrase, “Oh, good sir, I just want to go home”).

All of the dialogue is spoken slowly, as if being read to children, though profanity prevails, and very carefully enunciated, though the “Rabbit” is over-the-top in facial expressions, and sounds more like Snidely Whiplash as he emotes by gnashing his teeth (would that make Martha “Nell”?). Did I mention that the “Rabbit” also has an alarm clock around his neck like the White Rabbit in Alice in Wonderland?

In other films, the over exaggeration in emoting and movement would be the signs of amateurism, but as a purposeful stylistic choice, it covers a lot of bases, and because of it being consistent throughout rather than one or two actors trying their best, it flows quite well into the fairy tale narrative and motif.

A wise choice is as the scenarios change as she “kills all enemies” (Rule 2 of 3 given by the guy in the pink rabbit suit), the film nicely plays with how much is outside the scope of Martha, and how much is in her head, a manifestation of a possible psychic break after an alleged tragic event (again, real or Rabbit manipulation?). This is nicely exemplified in the character of Police Detective Fox (David Ketter, looking like he just stepped out of a Beach Boys’ cover band). 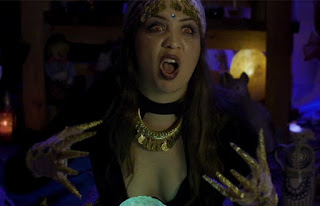 The SFX (the killings are practical and the titles that pop up on occasion or flashes when there is movement from scene to scene are digital) by Zetkin are extremely cheesy and are as cartoonish as the rest, which is appropriate. However, the set design and lighting are incredibly well done and are a spotlight, and yet still fits into the overall tone of everything else.

I have, quite honestly, not seen any of Zetkin’s other films, such as Planet Zee (2021), so I cannot compare them, but as a standalone, I was impressed by the level of the mixing of mediums of film and fairy tale. Despite sometimes having a bit of an issue with the accents (as I said earlier), especially with Bialke’s teeth gnashing, overall, I had fun with this accepting it as it is and what I feel like the mood it was going for, which I believe was achieved. This is indie filmmaking at its most basic level, a family affair, and I ended it with a smile. It feels like it was left open for a possible sequel, which I would look forward to viewing.