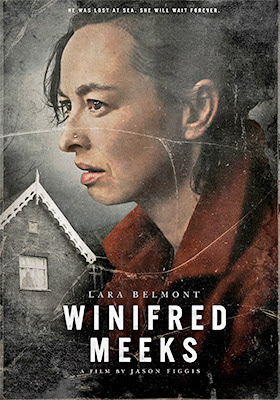 I was excited about getting the chance to review another film by director Jason Figgis. While he has been incredibly prolific over the last few years, I had seen and reviewed two of his previous output: Children of a Darker Dawn (2012) and Don’t You Recognise Me? (2016). Both of these films are very dark and intense, and quite beautifully shot.

Truthfully, I must admit that ghost stories are among my faves, especially with a gothic nod. And this doesn’t as much nod as headbang. Time to click on *play*.

Asthmatic Anna James (Lara Belmont) is a popular author of youth mysteries on a deadline, who has hit a dry patch. What better way to rekindle a writing block than to rent a stunning house in the middle of nowhere? This particular trope is well worn (e.g., 2004’s Secret Window, possibly 2007’s 1408); perhaps the underlying connection is that the creative mind is more open to spirituality.

Anyway, the Seaview House (the opening shot tells why) in Suffolk, England, is beautiful, but imbued with a darkness (camera filters help) that could have come right out of Shirley Jackson’s iconic opening paragraph of her novel, The Haunting of Hill House (1959). At once both modern (such as a flat-screen TV) and rustic (lead pane windows and a dial phone), it is a perfect place for a spookie to be hanging around, doncha think? Figgis, who was also the Director of Photography, does a very masterful job of capturing it in a loving-yet-mysterious manner. I really enjoyed how he would situate the camera in a different room, and you would watch the character of focus through the doorway.

The first act is mostly atmospheric, as Anna settles in for the night, with a beautiful score and long and luxurious shots at the start, other than a quick jump scare. We get familiar with the sadness of Anna, reflecting these moody views of her temporary life at the house. It definitely starts as a slow burn, with one subtle indication that there is something not right, shown almost as a throwaway line (okay image), and another warning of what’s to come. Which brings me to a digression, if you will forgive me: why do genre films (especially) need to have a scene of someone brushing their teeth? It’s a pet peeve, sorry. Now back to our scheduled program…

Ever slowly, but increasingly so, the presence of a previous owner, the titular Winifred (Julie Abbott) makes herself known. She vacillates between sadness and anger, both reflecting the mood of Anna, but bringing her own story with it, which is the mystery behind the film of which Anna seeks to learn in the second act.

There are a few inside subtle signals, such as this youth mystery writer being forced to listen to a radio play version of Sherlock Holmes, and early-in-the-film showing of the rising dead in the form of Nosferatu: eine Symphonie des Grauens (1922), and the house haunting film House on Haunted Hill (1959), among others on the telly; gotta love public domain. In fact, there is a lot of radio talking programs disbursed throughout, such as writings by the “father of modern medicine, “Canadian physician Sir William Osler, who promoted euthanasia.

In the nothin’ for nothin’ department, I found the bookstore Anna goes into in Westleton, on Google Maps, thanks to the Snug Tea Room across the road. That made me feel good, for some reason. She goes to the store to research the house (though any author I know would stop to see if they could find their own books).

While this is a contemporary story – albeit with an older ghost from a hundred years ago – I would definitely define this as gothic, with its turn-of-the-century (at least) house and what inhabits within its walls (and beyond).

I believed I figured out the ending pretty early on, but I’m happy to say I was wrong, Figgis did not take the easy and obvious route, which is refreshing. With only two living on-screen characters and one un-, the rest of the cast is either on the phone or mostly the radio. Perhaps the disembodied voices are to reflect the spirits of the world, or specifically Winifred. It is a solid choice. As, in rare exception, no two people are seen together between the three characters, and in those cases, they are easily 6 feet apart. I am assuming this was shot during the COVID-19 epidemic, and was edited (by Figgis) in a very sharp and precise way. The photography and drone work are excellent, over the beautiful West Coast of England. 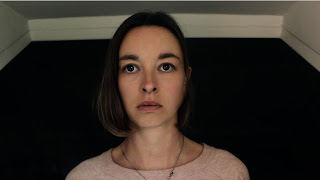 My only quibble about the film, and I know this is trivial at best, is I do not like the picture of Belmont on the poster as it does not do her justice.

There is no blood, no violence, no nudity (other than an upper back), and no contact, and yet this still manages to be extremely creepy, which is a credit to Figgis. My appreciation of his work just keeps growing.